Our In the Stacks this time is similar to our last in that it is a collection of mystery stories written in tribute to another writer, but while Solar Pons is largely a Sherlockian pastiche that took off on a life of his own, Edogawa Ranpo’s collection of somewhat Poe inspired stories, Japanese Tales of Mystery & Imagination, is a classic of psychological mystery.

Ranpo, born Hirai Tarō, took his pen name in tribute to Poe (as you say Edogawa Ranpo, note that it is a phonetic play on Edgar Allan Poe) and some of his stories definitely fit into Poe’s elements of gothic sensibilities, psychological underpinnings, and a sense of puzzle and play. Ranpo, though, largely avoids the floridness that was one of Poe’s greatest strengths and weaknesses, making him quite readable while retaining the thrilling energy of old estates and city streets and people who sneak around in the night [how much this is owed to James B. Harris, the translator, is unknown to me but fans of the original language version can feel free to comment below]. 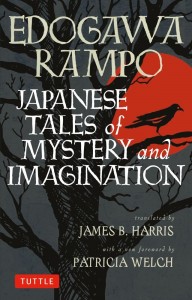 Notable stories in Japanese Tales include

Most of these are about the psychology of the crime more than the crime itself. A couple, “Hell of Mirrors” and “The Traveler with the Pasted Rag Picture”, are actually closer to weird fiction more than mystery, but make for some nice spice in the mix.

Our copy is up on the third floor, north side, with the call number, PL826 .D6 J3 1956. It is the sixth printing of the 1956 Tuttle edition. You can see more information on the Goodreads page for Japanese Tales of Mystery & Imagination. That link has reviews and some edition notes and links to buy a copy if you want.

As a note, his pen name is most often romanized as Ranpo, now, but earlier romanizations (including the one on the cover of the book, though not the book’s record) is Rampo, with an “m”.