On February 12, 2015, at 5:30, the Salmon Library will be hosting author John William Davis at a book talk about his own Rainy Street Stories: Reflections on Secret Wars, Espionage, and Terrorism. Come out to listen to his anecdotes, ask him questions, and enjoy some light refreshments. The talk will be in Library room 111. 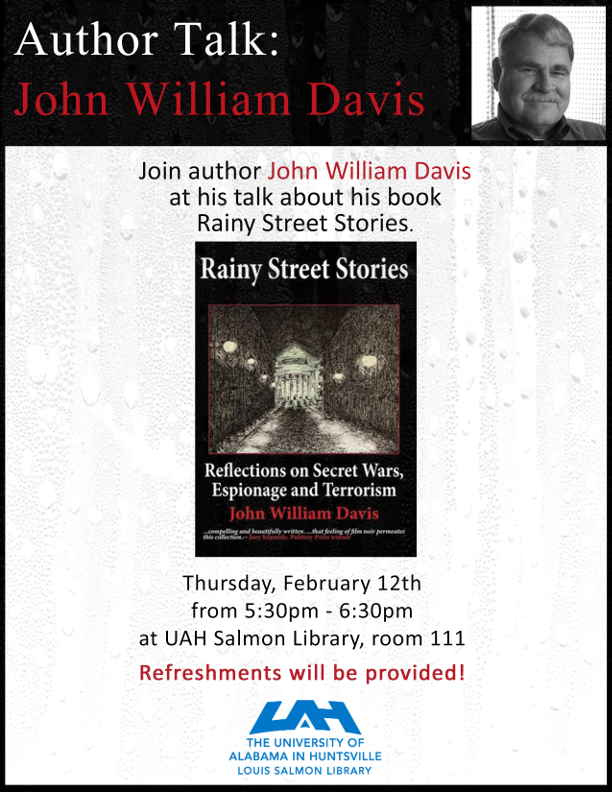 Rainy Street Stories is a composition of powerful reflections on today’s espionage, terrorism, and secret wars. These stories, essays, and poems by John Davis, a retired intelligence officer, take place from Europe, to Asia, and back to the Americas. He lived overseas for many years, where he served as a soldier, civil servant, and gifted linguist. Davis writes with a thoughtful, compassionate, and fair assessment of his lifetime lived during wars and conflicts which were his generation’s legacy from World War II. He recounts mysterious, sometimes strangely suggestive, even curiously puzzling tales. Each will cause the reader to think.

You can read reviews of the book from The SOHO Journal and from The Journal of Strategic Security. In SOHO’s review, D. Clark MacPherson writes:

Davis’s Rainy Street Stories does not gloss over lines with the novelist’s adroitness as does LeCarre, nor does he appear to draw upon the wealth of knowledge that Nigel West, the “Godfather of Intelligence,” draws upon as the acknowledged historian of the Intelligence field. Instead, the reader is drawn into a collaboration with Davis in understanding the moral dilemma and making the difficult philosophical decisions about how we proceed from here. Davis enables the reader to travel with him by using short essays and poems that evoke the feelings and experiences of fear, betrayal, pain and death that are intrinsic and inescapable elements of the secret and not-so-secret wars.

Those who wish to buy a copy of the book can do so through Amazon, through Barnes and Noble, or [if they prefer to find a local brick-and-mortar that carries it], can search through IndieBound.